at the Coffeeville High gym.
Posted by Unknown at 10:37 AM No comments: 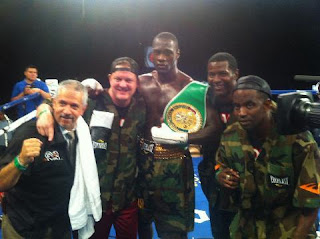 The first of two vicious right-hand shots from heavyweight Deontay Wilder landed sharply on the left temple of Sergei Liakhovich, putting the ex-beltholder flat on his back where he remained, legs and arms twitching.

Referee Tom Taylor swiftly waved an end to the bout, dropping to one knee and grabbing Liakhovich by the chin with his left hand.  He cradled the fighter's head with his right and told him, "Stay down."

Wilder, a 6-foot-7 2008 Olympic bronze medalist, was oblivious to what was transpiring behind him at the time.  He mugged for the camera, wagging his tongue and leaning over the ropes to embrace the cheers of the crowd in celebration of his 29th straight knockout in as many fights.

"But this time, I felt it a little bit, but that was definitely not all of the force of my punch.  I think that was more the position that he was in, and where I was.  I had good gravity, I had good positioning and balance, and my feet were spread apart so I had good leverage on the punch.  When I hit him, I saw him going down, and I just went to my neutral corner.  I knew that it was over, because my corner was telling me that it was over when he fell down.  So I was all happy and celebrating.

Wilder's demeanor changed, somewhat, upon seeing a replay of his triumph over Liakhovich, who had entered the bout having suffered consecutive ninth-round knockout losses to unbeaten contenders Robert Helenius and Bryant Jennings.

"I saw it afterward on the replay on the big screen when I looked back and I saw it on the monitor.  That's when my smile went into a frown, and I was concerned and I was worried, because that was a scary moment.  That was one of those things that, when I saw that, I was like, 'oh, man,' and I was saying prayers for him," said Wilder.

"They're saying that he's going to be okay, and I heard that he's going to be in the hospital for a couple of days, but that was a scary moment.  I've seen it all over the place.  That was on YouTube and it's on the internet.  Just to see his eyes roll into the back of his head and him going into a seizure like that, and he had a concussion as well, that was scary.  Very scary."

A 27-year-old father of tow girls, ages 8 and 2, Wilder said that he reconciles his role as perhaps the division's most devastation puncher through his practice of praying before his fights.

"I always tell people that I have two prayers.  I have a team prayer, and I have an individual prayer.  The team prayer is always about victory, and even in my personal prayer, that's there about winning.   But in my personal prayer, I also express to God that I want to knock out my opponent, but I don't want to hurt them to the point where they can't go back to their job, or they can't do what they love to do anymore where they can't provide for their families," said Wilder.

"I know that this is what we signed up to do, and that it's a part of the business, but I definitely don't want to be the guy who kills somebody in the ring.  I wouldn't want that on my heart.  Winning is one thing, but hurting somebody to the point where they can't support their family?  I'm a father myself, and I love my kids, and I want to support my kids and if I couldn't support them no more - especially being a man - that would truly hurt my heart.  So I definitely don't want to hurt nobody.  But I'm definitely going to keep doing what I do, you know, because I love the knockouts."
Posted by Unknown at 6:17 PM No comments: The former WBO heavyweight champion was supposed to provide Wilder, a Tuscaloosa native solid work in extending him past the fourth round for the first time.  Instead, Liakhovich didn't make it through the first round.  Previously, no opponent had been able to get rid of the Scottsdale, Ariz., resident in less than nine rounds.

Wilder was largely a project after turning professional.  Though he won a medal in Beijing, China, he was still a novice with less than 50 amateur fights to his credit.

Over the past five years, Wilder cut his teeth against modest opposition, mostly away from bright lights and expectations that come with major television.  Friday's Showtime-televised main event could force Wilder to be moved quicker than anyone anticipated.

Wilder has sparred Wladimir and Vitali Klitschko, the two-headed heavyweight monster that has reigned over the division for much of the last decade.  Is Wilder that far from being ready to test himself against either brother without headgear?  Is it something Wilder would be interested in if the time comes?

"I thought about that after camp, because I gave such tremendous work to them (as a sparring partner)," said Wilder after Friday night's victory.  "The reply I got from sparring them, I got the feeling maybe they'll hold off on fighting me, because they know what I'm capable of doing.

"At the same time, those guys are very competitive to where if you think you're ready, and I know if you talk enough, they will fight you."
While Wilder is still a few considerable steps away from being in that position, it is not out of the realm of possibility.  His first focus is establishing himself as the premiere American heavyweight.

Alongside Wilder, there are two other stateside heavyweights making a name for themselves.
Andy Ruiz Jr. would never win a body building contest against Wilder, but has shown impressive skills despite a less than appealing physique.  That he is promoted by Top Rank, while Wilder is with bitter rival Golden Boy Promotions, means a showdown between the two is unlikely.

A more reasonable fight would come against Bryant Jennings of Philadelphia.  Jennings and Wilder have exchanged words in the media and Wilder just starched a guy that Jennings took nine rounds to eliminate.

Next month, American heavyweights Seth Mitchell and Chris Arreola meet in a  crossroads fight.  Golden Boy CEO Richard Schaefer has already indicated the winner could be next for Wilder.  It would be a solid jump in class, and the first fight where some might go against Wilder in pre-fight predictions.

Wilder is determined in his mission to become the first American heavyweight champion since 2007, when Shannon Briggs held the belt briefly - after beating Liakhovich, ironically.

"I think I've got America behind me," said Wilder.  "There can only be one American heavyweight, and his name is Deontay Wilder." Special to The Tuscaloosa News

INDIO, Calif. | Tuscaloosa heavyweight boxer Deontay Wilder, the 2008 Olympic bronze medalist, takes his first big step up in class tonight when he meets former WBO heavyweight champion Sergei Liakhovich in a 10-round main event. The card will be televised on Showtime.

Wilder has a perfect 28-0 record with 28 knockouts since turning professional almost five years ago. None of those knockouts have come against a fighter in the class of Liakhovich, who in 2006 upset the odds by earning a decision victory over Lamon Brewster to win a version of the heavyweight title.

Though Liakhovich (25-5 16 knockouts) has won just two of his last six bouts, all four losses have come against quality contenders. Wilder is looking to establish himself as one of the best young American heavyweights; an impressive win over Liakhovich would go far in making that claim.

Liakhovich should provide a good litmus test to gauge Wilder's progression. He's never been past the fourth round, while Liakhovich hasn't been stopped before the ninth.

One of the other premiere young American heavyweights Wilder is trying to measure himself against is unbeaten Philadelphian, Bryant Jennings (17-0, 9 knockouts), who stopped Liakhovich on his stool in the ninth round of their fight last March. That marked the last time the Belarusian stepped into the ring.

Wilder and Jennings exchanged heated words with one another on ATG Radio (an internet radio show) a week ago.

Wilder and Liakhovich weighed in Thursday, with the former looking much like a future champion, coming in at a muscular 224 pounds. Liakhovich has seen better days, weighing 232 pounds.

Wilder is a physical specimen at 6-foot-7 and has sparred with heavyweight champion brothers Vitali and Wladimir Klitschko. Despite his fight night foes being of lesser credentials, Wilder has benefitted from working with the two best heavyweights today Liakhovich feels as though the experience factor will be a big reason for his success on Friday.

“One of the main guys I spar with is a tall guy like him,” Liakhovich said after weighing in.

“I've fought a lot of tall guys like [Robert] Helenius and [Nicolay] Valuev, which will help me in terms of knowing what to do against a tall opponent.”

Liakhovich failed to note that in those two fights, Valuev shut him out and Helenius stopped him in nine rounds. Perhaps those twenty plus rounds with giants will play a positive factor.

If Wilder knocks out Liakhovich with ease the way he has dispatched previous opponents, he doesn't expect it to be enough to quiet the naysayers.

“I feel like no matter who I fight, I'm not going to get credit,” Wilder said. “If I knock him out early, they'll say he was old, but I just gotta go out there and take care of business.”

Despite what Wilder says, an impressive early knockout would help speed up his ascent up the ladder.  When looking back at his career years from now, it is possible that tonight's fight could be considered the point where he became worthy of the hype.
Posted by Unknown at 12:07 PM No comments:

A Great Team of Talent! 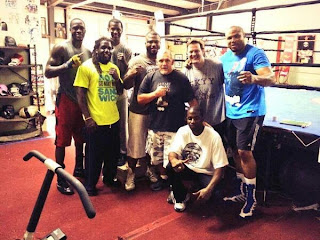 It's awesome to have so much talent in one room!  Thanks to these guys for all of their hard work!  From left to right:  Deontay Wilder, sparring partner Bryant Ezell, Coach Mark Breland, sparring partner Alonzo Butler, Coach John Foust, Coach Jay Deas, sparring partner Jameel McCline.  Kneeling is Coach Cuz.
Posted by Unknown at 9:30 PM No comments: