Posted by Unknown at 9:30 AM No comments:

Tuscaloosa's Deontay Wilder could be in line for heavyweight title shot 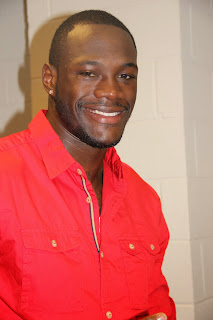 ATLANTIC CITY, N.J. | After 30 wins and 30 knockouts, a world title shot could be next for Tuscaloosa's Deontay Wilder.
Richard Schaefer, the CEO of Wilder's promotional company, Golden Boy Promotions, said he is working on a fight between Wilder (30-0, 30 KO) and Canadian Bermane Stiverne (22-1-1, 20 KO) for the WBC heavyweight title.
Schaefer made the announcement following Wilder's fourth-round TKO of Nicolai Firtha at Boardwalk Hall on Saturday night.
Schaefer said discussions between Golden Boy and Stiverne's representatives about a potential match are ongoing.
“(Wilder-Stiverne) was the plan, that is the plan,” Schaefer said. “I'm going to do whatever is in my power to get it done because I know (Wilder) is going to do everything in the ring to make that plan come true.”
The opportunity for a world championship arises because current WBC champion Vitali Klitschko, 42, plans to run for president in his home country of Ukraine in 2015 and will likely vacate the belt.
There are a couple of hurdles, however.
First, Klitschko will have to officially notify the WBC that he is vacating the title. Schaefer believes that announcement will come in December.
The second hurdle is the WBC will have to agree to award the vacated belt to the Wilder-Steverne winner. Discussions between Schaefer and the WBC are ongoing.
Stiverne, 34, is the No. 1 contender in the WBC rankings and was scheduled to fight Klitschko for the title in August. The fight was postponed when Klitschko suffered a hand injury.
Wilder is the WBC's No. 3 contender behind Chris Arreola in the WBC's latest rankings, causing uncertainty about whether the WBC would agree to give the Stiverne-Wilder winner the title outright.
A Stiverne-Wilder bout carries more intrigue because Stiverne just beat Arreola by unanimous decision in April. Schaefer said there is the possibility for a “doubleheader,” to crown a champion; Arreola could be allowed to fight the Stiverne-Wilder winner for the belt or the less likely scenario that Wilder would get the winner of a Stivern-Arreola rematch.
“The fact is that Deontay and Arreola are both in position to fight for the heavyweight title of the world, there's no doubt about it. We'll just have to see,” Schaefer said. “I think it might be easier and more sellable from the first get-go to have Stiverne fight Wilder because they haven't fought yet.”
World title or not, a fight with Stiverne would be Wilder's biggest test to date. A win could help quiet criticism that Wilder's resume lacks a quality opponent.
“We don't really care about what people think about us or what they are saying about us,” Wilder said. “We've got a goal, we've got a plan, we're on a mission. We're going through the orders that we've got and we're keeping the plan that we have until the mission is complete.”
Schaefer believes the 28-year-old Wilder is ready for the next step.
“He has impressed me immensely. I think he really has an opportunity to become the heavyweight champion,” Schafer said. “He's terrific, he's a very charismatic guy outside of the ring, he's exactly the kind of person and personality we have been waiting (on) in the United States and hoping for to carry on the rich tradition we have for the heavyweight championship of the world.
“He is the guy I think who can do it.”
Posted by Unknown at 9:25 AM No comments: